Youngest Woman To Have Full Beard Kaur At 24 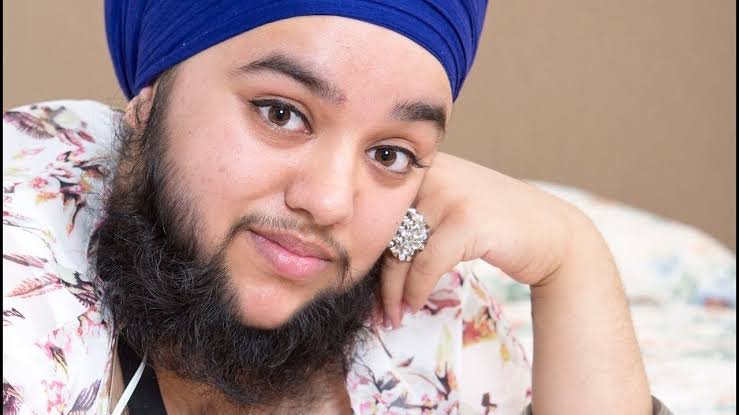 On the day of International Day of the Girl, Guinness World Records featured 5 unstoppable female record holders for girls all over the world to aspire to. Harnaam Kaur is one such girl.

She is a 24-year-old British anti bullying activist, life coach, and motivational speaker.

She holds the Guinness World Record for being the youngest woman to grow a full beard. Her record citation read: "Now with a beard measuring as long as six inches in places, she overcame years of bullying to take ownership of her appearance and achieve this record title at the age of 24 years 282 days.

At one time in her life, Harnaam became so self-conscious that she refused to leave her house, except to go to lessons, and at her lowest point, she began self-harming and even considered taking her own life.

Born on November 29, 1990, Harnaam first started to notice that she was growing facial hair at the age of 11. She was then diagnosed with Polycystic Ovary syndrome at the age of 12, a condition that means she has much more testosterone than most women which is what causes hair to grow

Kaur initially tried to remove her facial hair due to constant bullying and embarrassment. With time, she has embraced her unconventional appearance and has become a spokesperson for the body positive movement.

Before coming to the limelight, she was working as a teaching assistant for her uniqueness.

In 2014, she also became the first woman with a beard to walk the ramp in London Fashion Week. Now, she is endorsing several brands and products. She also expresses her voice through her social media channels, Facebook, Twitter, and Youtube.

Her journey from being a depressed, self conscious little girl to an activist and a powerful model is truly inspiring.

he is beautiful indeed kudos

Nice one,she is beautiful with the beards

Wow this is shocking and enticing

Thanks for the information great

This information was helpful to me

This information was helpful to me

Thanks for the update its vital

Thanks for the vital update

Wahoo nice one thanks for the update

Thanks for this great information

Wow So great Thanks for the information

She is a beautiful guy

Thanks for the great news

Thanks for this vital information

Thanks for this great information

Thanks a lot for sharing the information