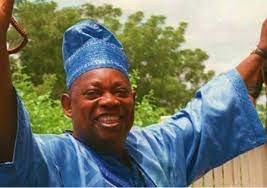 President Buhari has reveal in a statement that the documentary which shows Late Mashood Abiola as the 1993 election will will be televised on 12, June 2021

The documentary file is titled  ‘Nigeria: Consolidating Democracy and National Unity’, will be shown by  NTA and Channels TV respectively

According to Garba Shehu, the Presidential spokesman while revealing the info stated that the documentary is to mark as a commemoration to the 3rd anniversary officially recognising June 12 as Nigerian's Democracy day.

He added that the documentary file has been filmed by pro movie maker Ose Oyemamde feauturing President Muhammadu Buhari, Bola Tinubu, national leader of the All Progressives Congress (APC), and Abdulsalami Abubakar plus two children of the Late Abiola (Kola and Hafsat) and Late human activist lawyer's son Gani Fawehinmi

“The documentary is to commemorate the third anniversary of the landmark decision by President Muhammadu Buhari to officially recognise the annulled election and award its winner, Bashorun M.K.O. Abiola, the Grand Commander of the Federal Republic (GCFR) national honour,” the statement reads.

“The film features President Buhari and dignitaries who were central to the annulled election and the events that followed, including General Abdulsalam Abubakar, Asiwaju Bola Tinubu, Kola Abiola, Hafsat Abiola-Costello and Mohammed Fawehinmi, son of legal luminary, Chief Gani Fawehinmi, who was also recognised with a Grand Commander of the Order of the Niger (GCON) national honour.

“With sections dedicated to the annulled election, the recognition process and the evolution of Nigerian democracy from Independence in 1960, viewers will be treated to a political documentary on the scale never seen in Nigeria’s film and television history with revelations from key actors.

“Filmed exclusively in Nigeria and directed by the award winning, Nigerian-American, Hollywood-based filmmaker, Ose Oyamendan, the documentary also traces the evolution of Nigerian democracy and the continuous quest for national unity.

“Viewers will also will also see and hear many others including Ambassador Shehu Malami, nephew of Sir Ahmadu Bello and son of Sultan Abubakar III, as they capture the spirit of Nigeria’s independence Day as never revealed before.”