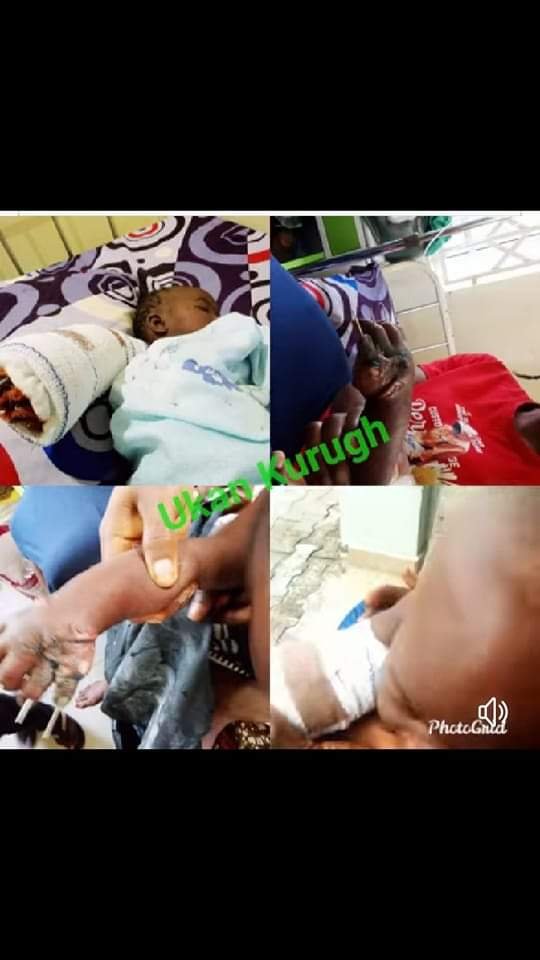 According to human activist Ukan Kurugh police started shooting for a no given reason claimed they were only returning fire from unknown gun men.

"The Injustice & Brutality Of The Nigerian Police Benue Command On A 6 Months Old Baby Hit By Stray Bullet From Their Men.

It was a very black Tuesday for the family of Mr Tyokaa Ahaangba.

Mr Ahaangba is a commercial motorcycle rider  a.k.a Okada, while his wife has a small space where sells foodstuff. They both out for their daily routine, Mr. Akaahan's wife was with their seven- month old daughter, Nadoo.

But they were both unprepared for what was going to happen to them that day. At about 9pm, a white Hilux police van screeched to a stop in front of the Makurdi International Market junction, and some police officers jumped out and started shooting sporadically!!

There was a general panic in the area, and everyone took to their heels including Mrs Ahaangba and her child.

As they were running for their lives, they could hear more gunshots from the policemen. Unknown to Ngodoo's mother, a bullet had caught her daughter's fore arm.

The panicking mother continued her race home while Nadoo cried in pains. The mother was heartbroken when she discovered at home that her daughter's arm was shattered by a police bullet. The only thing that was holding it was a thin strip of skin!!

With help, the mother took her baby to the Police E Division Akpehe, where they reported the incident. With the assistance of the Divisional Police Officer, the baby's arm was bandage.

From E Division, they moved to Benue State Teaching Tospital, but  then they were referred out because of the skeletal services at the hospital.

They finally came to Emory Specialist Hospital where the doctor set the bill for the surgery at Three Hundred Thousand Naira.

When the case was reported to Commissioner of police, the gun toting policemen were rounded up, but they claimed that they were shot at by unknown gunmen in the area and they were only returning gunfire.

This lie was disputed by a witness, Miss Iveren Tor who was nearby when all this took place, and she saw all that happened. She said there was no exchange of gunfire, that the policemen jus started shooting without any provocation.

After she made her statement, some policemen were detained, and a contribution of Two Hundred Thousand Naira  was realised. But after the initial down payment, nothing has been done again.

Baby Nadoo has been  left wallowing in pain, and the police have been avoiding to take any more  responsibility for the treatment of the victim.

Haba! Nigerian Police, with your recklessness you have destroyed the future of a baby. She may become disabled and loose her arm due to the carelessness of your men, and you choose to abandon this poor, helpless family??

Nawao!! How can an okada rider and his wife now fend and pay for the hospital bills of baby Nadoo whose wrist was shattered by a police bullet?

This is a family that is desperately trying to make ends meet, and now they are faced with a calamity that they can't even think of solving, how can they cope? Who will come to their aid?

They have no money. Who will take care of baby Nadoo's bills, because even the parents themselves can't feed, all they earn is now channelled to the daily upkeep of their injured baby.

When my notice was drawn to the incident, I visited Baby  Nadoo at the hospital. It was a teary eyes experience. Her fingers are gone, and the doctor had to implant pins into the bones to hold the wrist in place.

The pitiful and painful cry of the baby was unbearable, and the sight of the hand, which was already turning black, due to loss of blood flow was worrisome and alarming.

People of conscience, this is an injustice that is meted to this poor and struggling family.

We demand justice for this family, we have unanswered questions. What is the investigation report about these trigger happy police men who nearly ended the life of this young, innocent girl?

What is the Nigerian police force going to do to help out in taking care of the damages caused by their officers?

The police force should ensure and cooperate with civil societies so that those erring police men should face the consequences of what they have caused this poor, helpless family, to serve as an example to any other policeman who feels that with a gun in his hand, he is untouchable.

But most importantly, we plead with you, for financial support for this family, because if nothing is done soon, Baby Nadoo will lose her arm.

Please, nothing is too small, so the father Ahangba can be reached on 07062244297 at Emory Hospital Akpehe Wurukum Makurdi."