Nnamdi Kanu is more important than Anambra election, release him for peace to reign – Doyin 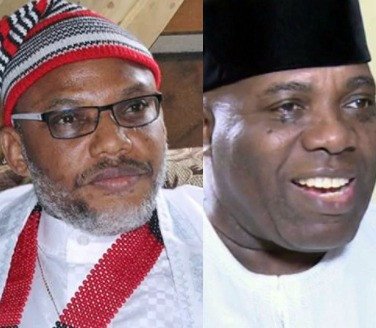 Doyin said if Kanu is release there will be peace during the Anambra and South East.

The Former Senior Special Assistant (SSA) to ex-president Goodluck Jonathan on public affairs said the life of Nnamdi Kanu is more important than the governorship election scheduled for November 6, 2021.

"The election will cause more harm if the Independent People of Biafra (IPOB) Is still in custody.

Biafra has come to stay, despite is a self evident which the stakeholders of these movements are predominantly youths.

“The Anambra State election is no doubt a security nightmare and a major cause for concern for many Nigerians. Whether we like it or not, the IPOB has become an established “Army of Resistance” for self-determination in the South-East.

Also, we must come to accept that the Biafra ideology has come to stay. Although it is self-evident that the major stakeholders of these movements are predominantly youths, the adult themselves share the concerns of these fighting youths even though they may prefer a different approach to achieving the same goals.

Unfortunately also, concurrent events in the nation make the counsels of the elders untenable and therefore unacceptable to the warring youths.

The Police have deployed 34, 000 officers. We do not know the numbers for the military and civil defence institutions. To the average citizens in Anambra State, this militarisation and over-policing, though inevitable, can nevertheless, be comforting.

From my own projections, nothing less than 50% of normally voting population, purely out of fear and apprehension, will stay in their houses and avoid voting. If this happens, the election itself becomes substantially flawed. This is because a major ingredient of democratic suffrage, ‘free and fair’ will be absent.

“While one must of necessity concede to the Federal Government that it should not normally tolerate or succumb to internal threats to peace and good order, perhaps it’s now time to seek the seemingly elusive peace in the South-East.

I hereby call on the Federal Government to release Nnamdi Kanu, if that will bring peace in the South-East zone, especially Anambra State. Nnamdi Kanu should be released for the sake of peace and order in that region. Nigerians are in pain. Nigerians are suffering and we can’t afford war whether local, regional or national. We don’t need it. We need peace.

Nnamdi Kanu is more important than the Anambra State governorship election. We need peace in all parts of this country, and if the release of Kanu will bring peace in Anambra State and the entire South-East zone, please the Federal Government should release him now.

I call on the Federal Government at this point of our national history to invite the leadership of IPOB to a peace meeting. The Government should listen to the complaints of the youths from the South-East region and see how a true solution can be negotiated.

I say this as someone who was part of government when Boko Haram was in its wake or infancy. The presumed might of the Federal Government made it look preposterous for the government to call a rag-tag group to a negotiating table.

Now after more than 10 years, thousands of deaths, human tragedies and millions of internal human displacements, and with billions of dollars down the drain, I am convinced that it was indeed an error not to have negotiated for peace.

Historically, since the mid-1900s, no insurgency, once fully established, lasts less than 15 years on the average. This is what I will like to remind this administration. Nigeria cannot afford to sustain another major internal rebellion, for another 15 years.”  Doyin noted.